In 2015 Eurotherm celebrated 50 years: half a century
of innovative thinking, implemented in technologies and solutions of a world level.

In 1965 a modest start-up company in England marked the beginning of Eurotherm in Worthing (West Sussex, England).
The founders were Jim Hartnett, Gerry Martin, Mike Somerville, and Jack Leonard. This Quartet designed, manufactured, assembled, packed, sold and delivered products. To some extent, product assembly was organized in the garage and on a kitchen table of Gerry Martin. They were facing the task of becoming profitable within the first six months — and the team just did it.

Today, over 50 years since, Eurotherm by Schneider Electric
a globally recognised company known for its specialist instrumentation, systems and services for energy intensive and regulated industries, continues
to design and manufacture configurable precision machine, process and power controllers,
and associated data recorders that enable its customers to get the most from their process.

60-70’s — Eurotherm
is gaining force and conquering the market.

1965 Product development started in one of the founders’ garages in 1965 and resulted in the birth of the MK1Temperature Controller. This first solid state control product exploited the rapidly expanding high-technology electronics of the 1960’s, providing the crucial level of temperature control accuracy required for what at the time was a new and fast growing industry.

1975 Eurotherm receives the Queen’s Award to industry as
a recognition of the company input into exports and international trade.

Leif Ringdahl, Eurotherm products user since 1989: «I can mention also that of the approximately
200 different units, mostly controllers and printers, I’ve bought over the years, none have failed during operation causing scrap or other problems, it’s what I call quality and reliability». 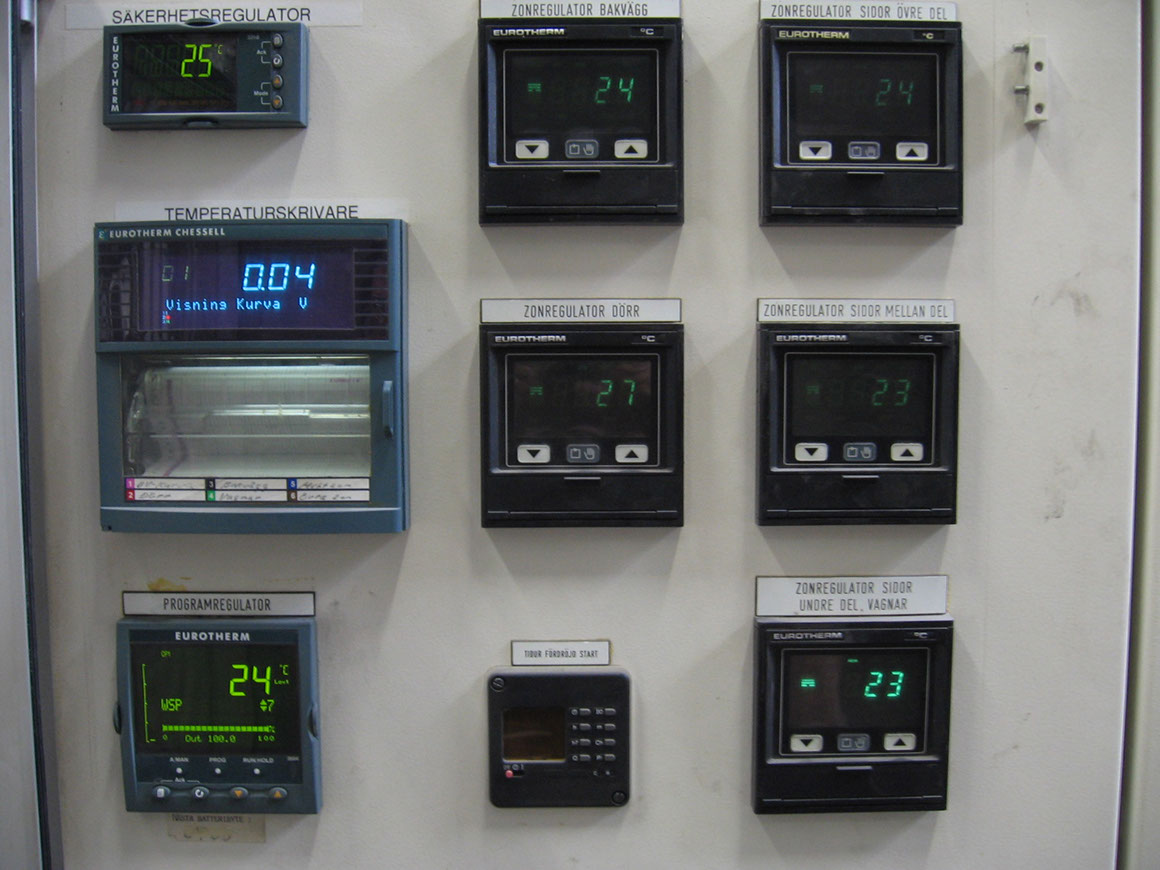 80-90's — Eurotherm is leading in the field of
data logging.

Changing quality requirements in various sectors of industry consequently effected developments in the area of automation and their applications.
The need to log digital data in a safe format as well as evolution of accuracy characteristics necessitated a new level of process control for batch technologies. Eurotherm built on Chessell expertise and was working consistently on this line, providing innovative solutions to the market.

By logging the process data
(plus other attributes such as energy consumed, quality output, throughput etc.) it is then possible
to analyse areas of potential improvements, make adjustments and record the effects of the change — a cycle used in quality control.

1971 The industry leading 301 Chessell Chart Recorder was introduced to the market, featuring modular design circuit boards and electro-mechanics. Customers liked this product because it was reliable and easy to service and understand.

1985 A remarkable achievement — the first in the world 4001 Paper Programmable Recorder was launched. A multichannel recorder with a digital display represented a new technological solution.

"The 48 week delivery timescale on the original Chessell 4000 was more due to the fact that the first deliveries all failed, and were recalled, with completely random faults in the field rather than due to customer demand. It was indeed a very unique product and combined early microprocessor control with what we discovered to be an excellent Van der Graff generator, a roll of paper transferring charge from a plastic roller at the top to another at the bottom until the static charge discharged and the resultant spark reset the processor at any point in its complex program hence the randomness of faults. 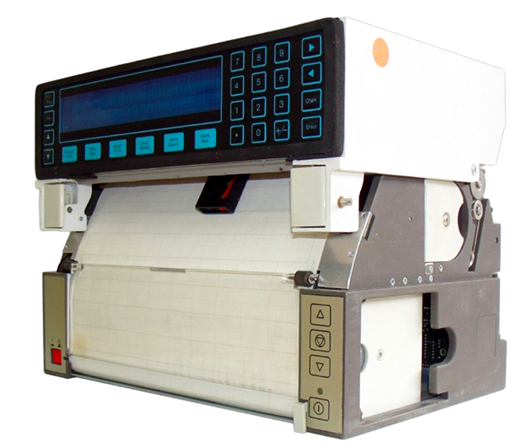 Finding the problem was a challenge — the solution was simple – create an electrical discharge path from the top roller to the bottom, the prototypes had this as the side panels were machined from Aluminium whereas the production items used moulded plastic parts."
Iain Duncan,Technical Director Chessell 1985-1989.

Since most of the initial sales
and deliveries had been spread geographically across the USA
I noticed the times of failure exactly followed the frost line as it moved from West to East across
the northern part of the country,
and realised that our problem was being caused by lowering humidity.

1993 The launch of the world first hybrid graphic recorder 4250G. A 4250G series recorders were the first step on the way to changeover from paper logging to digital technologies, which is the most preferred technology for data acquisition and logging in most industries. 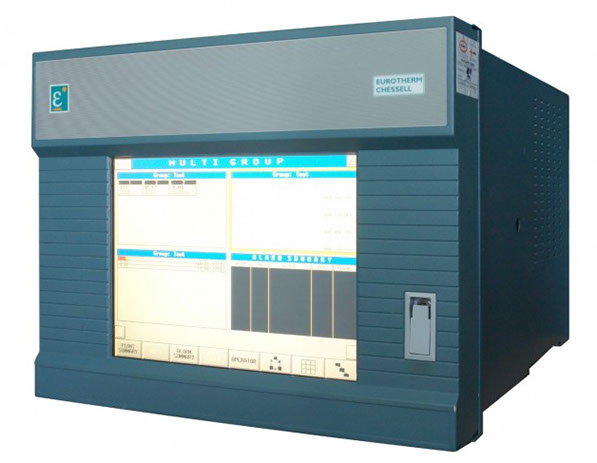 The unit had a digital graphic display with data logging on a CD. As a redundancy feature a paper chart back up and traditional pens were provided behind the screen. 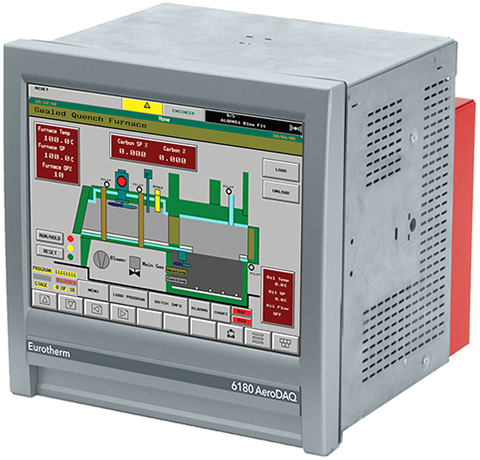 State-of-the-art industrial paperless Eurotherm recorders are the most advanced available on the market, easy to use and versatile data logging units, providing for reliable, flexible and easy start and user friendly operation.

Development of heat treatment technologies in 80-90s in its turn lead to creation of advanced automation means.

Once again Eurotherm was leading with an offer of innovative and reliable temperature control solutions. The first microprocessor-based control system for materials heat treatment was developed for glass manufacturing and later on extended to cover other heat processes.

1979 A single loop 6350 Process Controller caused a major shakeup of the industry and was the foundation of System 6000. British Steel used these for process control until the late 90s.
A 4-bit Intel microprocessor became available in the market in the early 70s, and presented Eurotherm with another opportunity for a technological breakthrough.

George Turnbull, the TCS founder (became part of Eurotherm), recalled his first visit in 1974 to one of the largest glass manufacturers in the UK, to see first-hand the problems they were encountering in the manufacture of ophthalmic glass. It was understood very well that the process required extremely high precision temperature control for long periods of time.

A microprocessor technology at the time combined with Eurotherm expertise on temperature control allowed to bring system architecture to the Eurotherm product range for the very first time. The S6000 series controllers made it possible for the company to become a vendor for various glass manufacturers, covering international markets as well. 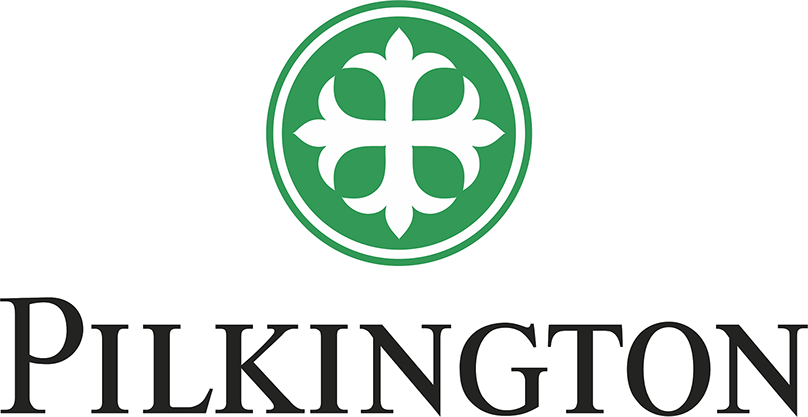 1984 A microprocessor PID controller 810 won the 1984 Design Council Award for being the first control product to use surface mount technology. (Design Council was established by Winston Churchill’s wartime government to search for the most innovative, creative and well-designed products aiming at the UK industry development).

Eurotherm specializes on applications which require compliance with stringent industrial standards, for example, FDA in pharmaceuticals and biotechnologies; CQI9 and AMS2750E for metals heat treatment in automobile and aerospace industries. 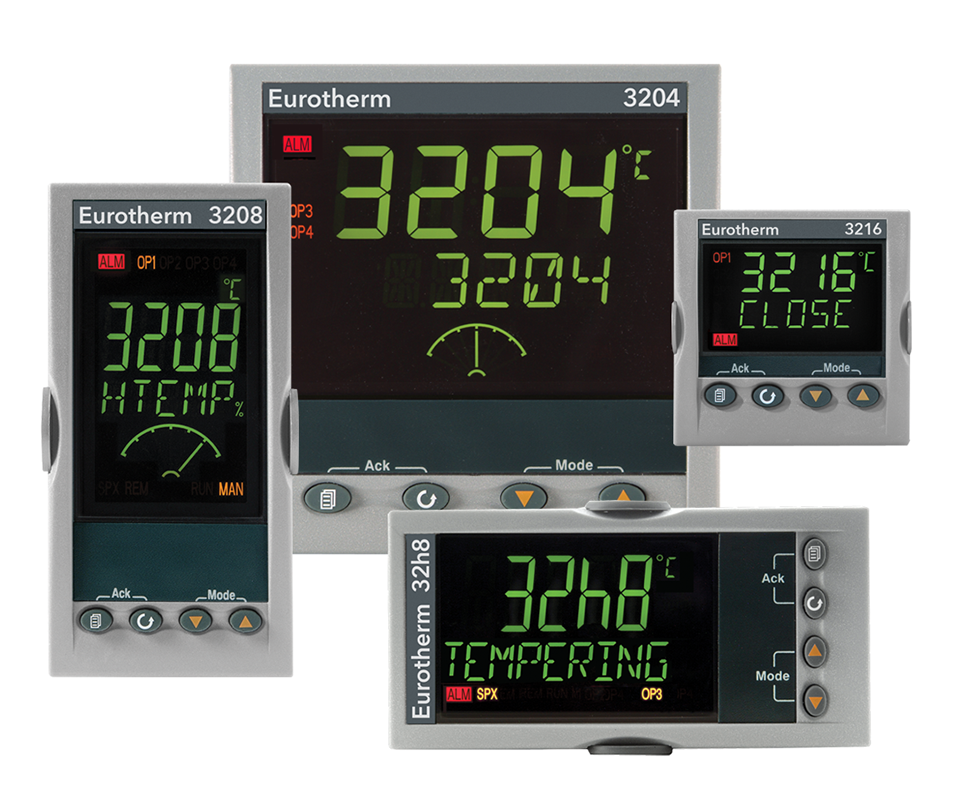 Up-to-date temperature and industrial Eurotherm controllers have an established reputation due to high precision PID-algorithms integrated into control strategy alongside with highly accurate input and outputs.

1980-2000 The period of rapid development of automated control systems which were becoming more powerful and in demand.

Eurotherm Maxi-Vis system emerged into market. This innovative proprietary distributed control system allowed a move into large systems and bigger applications such as oil refineries, and dominated the market for over a decade.

It was followed by a Tactician T1000 with an integrated graphic display and graphic block configurator. Some enterprises, glass companies in particular, still use Tactician today.

Energy efficiency and means of power control is another Eurotherm business. Building on decades of expertise and knowledge of energy intensive technologies, Eurotherm has organically developed it over the years.

1989 The first in industry power microprocessor based controller TC3000 dominated the market for two decades. 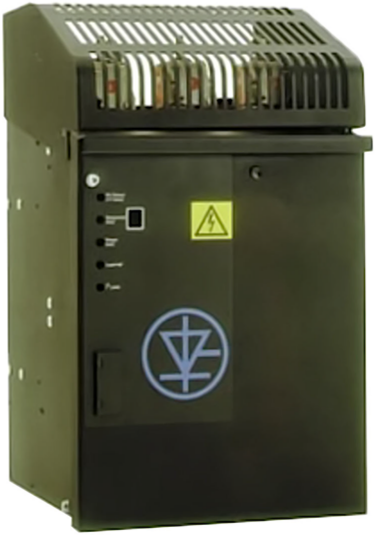 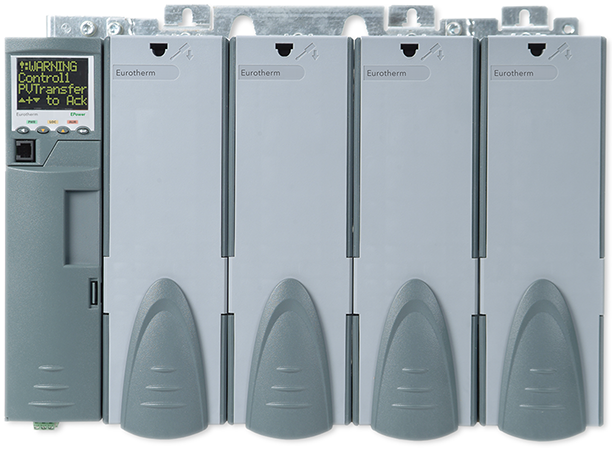 2007 An advanced EPower controller with Predictive Load Management (PLM) less than a year after release received the Engineers’ Choice Award in the Power category from Control Engineering magazine (2008).

The most advanced feature of EPower is Predictive Load Management. Applying this method keeps the energy consumed under a maximum power level specified
by the utility supplier by anticipating the energy requirements and managing the priority of loads.

PLM function does not change input power but provides a better distribution of energy across different loads in your installation, by managing the priority and, if necessary, load shedding. As a result the user is provided with an optimum load control via a smart mechanism.This prevents the costly surcharges associated with exceeding set power limits.

Predictive Load Management is
an innovative approach to energy consumption control. Electrical load prediction allows to solve the whole spectrum of on-line planning tasks and control both of a plant operation mode and a power generation system.

Eurotherm’s EPower controller competed against 86 new products in 25 categories with one winner selected for each category. Winning in the Power category was an indication of the high level of recognition and respect for an engineering product among specialists, and the role of the Eurotherm company as the driver of industrial automation solutions.

2010 – and the years
to follow: comprehensive competent offers
by Eurotherm.

2010 The nanodac recorder / controller, a later release by Eurotherm, is a unique solution in its class comprising data logging and PID control.

Out of some latest Eurotherm solutions presented to the market one may highlight a modular versadac recorder, which allows for multiple options of data processing and control. Data is archived on the Ethernet and is accessible from a PC or via a special operator’s Optivis panel.

Data management allows improvement of a process efficiency to the maximum.

The company investments into development of new solutions are focused on applications in which Eurotherm has most of the expertise — precision control and reliable data logging — aiming at providing more value for the customer. In the modern world company operators require a new generation of applications and programmes to get timely intelligent data in real time for decision making.

So why do customers continue to choose Eurotherm?

Some opinions expressed by managers of different Eurotherm departments:

“The unique difference is that we strive to understand what our customers are dealing with and adapt ourselves to solve their process problems” ; “We only sell two things, our brand equity, and our application know how …”

Chris Ashworth, Vice President: “Fifty years is an impressive milestone for any business. The success we have had over the last 50 years is really about two things, our innovation as a company and our people. We have a talented and knowledgeable employee base globally that includes segment and application experts, who support both our sales organisation and our customers.”

Heat treatment, medicine, pharmaceuticals, biotechnologies, glass and plastics production, food industry are Eurotherm focus sectors where the company implements its competences to the best extent.
The companies which follow the path of innovations will be successful in future. This way evolution goes, this is written in the Eurotherm genetic code.

VSP has been working with Eurotherm for over 2 decades. Initiated in the 90s, there were first large-scale projects implemented in metallurgy and energy sector. Beneficial cooperation continues today.